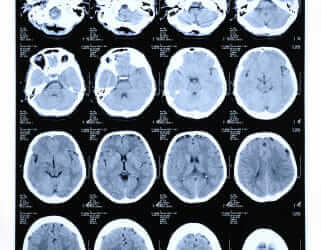 The abbreviation HH refers to the GNM new terminology “Hamerschen Herd”.
If we break this down into English then it simply means “Hamer Lesion” which describes the target ring configuration Dr. Hamer discovered when looking at catscans (CT’s) of the brain in his very early years after the discovery of the “The Iron Rule of Cancer” , the first biological law.

In the beginning he wasn’t actually looking to the brain for the answer, however he did already realize that cancers were initiated by a shock which was experienced by the psyche and then physically on the organ.
He made the brain connection while he was still working as an Internist in Munich when a patient came into Emergency unconscious while Dr. Hamer was still on duty.

This patient apparently had a heart attack and subsequently lost consciousness. Under those circumstances it is protocol to take a CT of the brain to determine if there was a brain pathology or an injury which rendered this patient unconscious. After all he could have hit his head when he collapsed from the heart attack.

To Dr. Hamer’s surprise, when he got the CT he saw that there was a pocket of edema (fluid) directly on the heart rhythm centre on the right hemisphere of the brain. It was at that moment that Dr. Hamer realized that the brain must somehow mediate what goes on between the psyche and the organ.

The more he explored this with his patients, the clearer the picture became to him. Over time, even though CTs were very scarce in the early 1980’s he managed to identify specific areas of conflict by a “target ring” which appeared in different areas of the brain.

Eventually he was able to connect these areas of activity with specific organs. The result was a very precise map of the brain that had in previous medical history, never been known to exist. Not only did he manage to correlate these rings of activity to organs but more precisely the kind of cellular structure in the body this area of activity was affecting.

As a matter of fact when someone has a biopsy, they look for the specific “histology” or cellular structure of what they find and this also confirms the germ layer that has been affected to produce this kind of pathology.

So you can see how important this discovery was in the history of Dr. Hamer’s research and the GNM.

As time went on Dr. Hamer also realized that these target rings or HH’s as we call them, changed their appearance which coincided with the progression of the conflict as it moved from the active phase (sympathicotonia) into the healing phase (vagotonia). As a result Dr. Hamer is now able to identify if the conflict is still active or if it is resolved by the appearance of these target rings in a CT of the brain.

Of course conventional medicine tried to dismiss that these target rings were the result of a biological shock, but instead as the result of what they call “artifacts”.

The CT device was not invented until the 1970’s and of course no one really knew what they were looking at when they saw these target rings so they were all labelled as “artifacts” which they believed were the result of a technical problem during the scanning process.

Artifacts can sometimes be identified in a CT, however they are single rings that disappear from image to image or device to device, whereas the HH Dr. Hamer identified can be seen in several images and of course will also be identified on another Catscan device.

What is more astounding is that if the angle of the image changes, the target ring is still visible. This indicates what Dr. Hamer had identified is that it is a “sphere” of activity occurring on a specific relay of the brain that was affected with a biological shock (DHS).

Naturally Dr. Hamer is a meticulous researcher and took this discovery to Siemens the developer and manufacturer of the Catscan device for confirmation.

It was at this meeting with several of Siemen’s radiologists that it was confirmed with signed documents declaring what Dr. Hamer identified was in fact NOT an artifact but a “Hamerschen Herd”.